The game of golf often mirrors the game of life. Paul McAllister is discovering that the hard way. As they say, “it’s called golf because all of the other four-letter words are taken!”

An intensely driven CEO of a successful international business, Paul is a success in everything—except life. Separated from his wife and estranged from his son, Paul’s steely-eyed focus remains solely on his next boardroom mega-deal. But like an errant tee-shot on a difficult hole, Paul’s life could use a do-over … a “mulligan” as golfers would say.

When the stress of life leads to an implosion on the golf course at a prestigious Pro-Am tournament, a humiliated Paul is left picking up the pieces of his broken life … and broken putter. Thankfully, his first steps toward a second chance are guided by a new-found friend, Will Dunn—known by everyone as “the Old Pro.” While Paul thinks the Old Pro will help him improve his golf game, he soon discovers a beloved mentor who is more focused on Paul’s priorities and purpose than his pitching and putting.

Based on the popular book by Wally Armstrong and Ken Blanchard, THE MULLIGAN is an inspiring reminder that second chances are only one step away. From the producer of BOBBY JONES: STROKE OF GENIUS, and the director-producer team behind THE ULTIMATE GIFT comes THE MULLIGAN, sporting an all-star cast that includes Eric Close (NASHVILLE, AMERICAN SNIPER) as Paul, Pat Boone as the Old Pro, and PGA golfer Tom Lehman and broadcasting legend Jim Nantz as themselves. See it in theaters in April of 2022.

Whether it’s a second shot during a friendly round, rediscovering lost priorities, or the opportunity to make something good of a situation gone bad, there are times we all could use a mulligan. 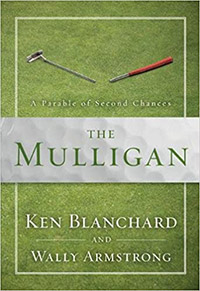 THE MULLIGAN is based on the beloved book by former PGA touring pro Wally Armstrong and bestselling author and business executive Ken Blanchard. This inspiring story about relationships, forgiveness, and priorities is a shot of grace. Golf's gracious do-over, a mulligan is the beginning of Paul McAllister’s second chance. Guided by the wisdom and advice of the Old Pro, Paul learns about priorities, self-confidence, and playing a good game both on and off the course. The Mulligan is a parable of second chances. Pick up a copy today.

For the latest news about THE MULLIGAN, be sure to register for email updates.